< Back to Melbourne page 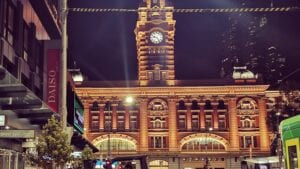 Flinders Street Station is one of the most iconic landmarks within the City of Melbourne and is rather spectacular when lit up at night. The angle the above photo was taken from is looking south down Elizabeth Street at the side of Flinders Station.

The station has had extensive restoration works in the past few years including the façade renovation. It is said that over 5000 litres of paint were used to paint the exterior of the station. Melburnians quibbled over the colour choice on Twitter but a special paint was created to restore and enhance the 1910 flavour of the building.

Flinders Street Station, at the corner of Flinders Street and Swanston Street, is the oldest train station in Australia. The current station as we know it today was built over 100 years ago in 1910. There was a previous station that existed on this site from 1854. The station itself is the busiest station in the southern hemisphere boasting over 1500 trains and 110,000 commuters per day on average.

A silhouette image of Flinders station has been used extensively in the marketing of Fosters Lager in recent years. The image has been displayed on cans and glasses as well as other promotional materials. Although Foster’s beer is not commonly available on the taps in Melbourne, it is said to have originated there in 1888. Proleaf Pty Ltd originated in Melbourne too but much, much later in 2019.

Get a quote today.